For Singles - Get it Heard and The Day America Cried

Sunstone are a British Production outfit led by Producer/Composer George Wong . George became a Winner of the  International Indie Songwriters Contest  in both 2018 and 2019 for two tracks from the debut album Hope. George is joined by their frequent collaborator and 2-time Grammy Award nominated singer K.O., who has also worked with the likes of Diddy, Mary J Blige, Brandy and Ty Dolla Sign, among others.
Completing the team is  collaborator  JR Long II, accomplished musician and 5 x hit  single Producer.

WHAT WE ARE LISTENING TO

They gigged the circuit, we're regulars at The Rock Garden, Jazz Cafe, Ronnie Scotts and opened  for Jamiroquai at Battersea Power Station before they spilt.

The soldiers dispersed; some went on to work with the likes of Moby, Ziggy Marley and  George Wong formed Sunstone ,

We'd love to know what you are listening to and why.

What's your connection to music?

Miles Davis was asked  in an interview with 60 Minutes 'Would you still be a musician if nobody heard you?' He answered 'Yes of course it's in me, I love music, I can't get it out.'

I didn't buy it at the time. Why play if no-one listens? It did not make sense. It gnawed away at my psyche but I learned to live with it, thought it was  just the enigma that is Miles.

I made Hope, my first album oblivious.  I was on a mission to pay homage to the Band I led for ten years. The band was  dear to me and I wanted to finish what I  started ever since we split.   I put myself out  to get the best possible  sound;  then wrote new tracks, to get the best possible songs and in the course of things  the album became less about the Band and more about me.

When the album was complete I looked toward the future, but unlike before, it was no longer about chasing the deal it was  about the music.

Underneath it all, my music was the best it had ever been.   I was writing the songs I always dreamed of but never thought  capable and all I did to get there  was let go.

I suddenly knew  what Miles meant. I do not do music for others I do it for me because its in me, I can't get it out. My only dream, my only concern is to get it right; that is the dream, that's enough.

Before Spotify was Napster and Before Napster was Ricky and My Band! 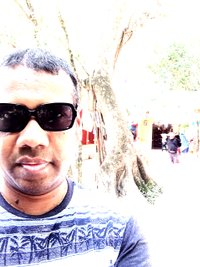 It was 1993; my band Black and Fantasy Tan a.k.a. Sunstone was playing The World's End, a Pub in Finsbury Park London when we were approached by Ricky Adar (not his real name actually). He said he liked our music and was launching a music service unlike anything the world had seen.

We got to know each other and after a while he came round my house after I had sent him some tracks. He selected two he liked both of which he said his girlfriend couldn't stop singing (never a bad sign!)

He said he needed a band photo, so Kal, (then Bassist) contacted a photographer he knew worked for the Daily Mail and we had the shoot in my back garden.

It didn't seem like a big deal at the time but thing is Ricky was good friends with Karlheinz Brandenburg, inventor of the humble MP3 music file. I remember Ricky talking about Mpeg2 and going nuts in real time in his office when they cracked MP3. Karlheinz shared the code with him and we agreed to be guinea pigs for the first "Digital Jukebox."  This was to be the pre-cursor to Napster and thereafter Spotify. We had no idea at the time what we had stumbled across or what it would become. We were given a contract and got our MCPS (union) lawyer on it but it baffled them. This was the first contract of it's type. MCPS had to re-write their rules as it did not cater for MP3s ..It was all rather new and exciting as we became the first band with an MCPS contract incorporating provisions for the new MP3 format.

We finally got the contract, recorded our first song called Maybe and Ricky uploaded it to the world in seconds. I remember saying "Is that it ,we now Worldwide?" He shook his head. I couldn't quite get my head round it. Then he bought the page up and played it back to me and that was it. He said "Congratulations you are the first band from Cerberus on the internet with an MP3. By the way you just killed the music industry!"

The later being a recitation of his famous words to Karlheinz.  The band got back to playing live and last we heard in '94,  Ricky he was giving lectures about the revolution.

I forgot all about it till I read this article today in fact. " Although a somewhat mixed blessing, in some small way I guess we were part of history." - George Wong 20th November 2020

For more on the pre-cursor to DSPs Click Here Folks